Alright, my stuff arrived today and let's see how it will turn out. Ripping rn. (11am)

I'm sure I'll start liking other tracks once I listen multiple times to these but this is my first impression so far:


Euro Baka Ichidai Vol. 11 It's sad to see that these mixes are so bad, but this isn't the fault of missing talent by FN2 / DJ Command (both are very talented to say the least).
No, it's just that these songs are so much eurobeat that these are incredibly hard or impossible to make an equivalent or better HT mix.
Both of them have proven that they are very much capable of delivering incredible HT tunes.

Take a look on Virtuous Suicide (157 BPM) (Raver's Nest 1) for example:
The same sample ('We can jump when the beat gets rough, dancing like a rising sun...') fits exactly perfect in this song.
It is spot on and keeps pace with the song.
The part after this is INCREDIBLE: "(sample) ... get on the floor. (peЯoco.) In the night freak me out beating my..." and the melody gets highlighted when the verse ends every time. THIS my friends, THIS is hyper techno at its BEST.

Virtuous Suicide has no eurobeat origin so it's basically from scratch and that's why it is so good.
You make something completely new and don't try to squeeze an already shaped song into some other form.
This is not to say you can't make remixes but you probably get the idea.

Now now... my Hyper Strike selection is complete, aside from Red Stream (I don't like speed rave) I should have every release from NJ zEn.
HS 1 - 7, HRS 1 + 2, UD and every single one was worth it's money.

There's not much to say about the tracks on this release to be honest, but this release marks the birth of Hyper Strike, the only circle that seriously focusses on Hyper Techno music (besides DW partially). I'm happy that I discovered this circle by accident and now it's one of my main ones. Hoping to see many many more releases in the future!

Broken The Disco is your typical NJ zEn song (not saying that it's bad, in fact quite the opposite) and the rest is decent too.

He made the wisest decision in his life - to pull uma into the mix.
I just can't express how good uma is in producing Hyper Techno and Trance music.
He's my probably my favorite of all time. Shortly after comes NJ zEn, brz, the椅子 and Francisco Gaitán. (Not counting SCP here of course).

Hate me but generally I don't like rock music at all. But this is something different, it's Rute!

I'm not gonna go into the detail for each guitar riff because they are ALL just out of this world.


As you guys might have seen the comments became a bit shorter each album, that's because I've been ripping for 12 hours (it's almost 11pm now).
I won't be going through Montage Green because most of the songs are just flat out crazy good and a few years old, nothing new.

All in all I'm very happy and thank you Lebon for posting 東方Miracle Eurobeat! I'll definitely keep that in mind, nmk is crushing it there.
Looking forward to Vol. 3!

Oh.. and before I forget: AXEL.K PLEASE COME BACK

I told you the HT mixes on EBI11 were bad.
I'm still not interessed in Raver's Nest. Only will be getting the extended songs.

The only downside for Touhou Miracle Eurobeat is that the mastering is LOUD AS FUCK. There's no difference between loud and quiet in there.
椛ちゃん、助けてぇぇぇぇぇ！
Top

Lebon14 wrote: ↑
09 Sep 2018, 03:36
The only downside for Touhou Miracle Eurobeat is that the mastering is LOUD AS FUCK. There's no difference between loud and quiet in there.

I know, it's actually quite funny how Light's BASTARD looks on audacity:

But TEB and EBI also suffer from this issue, varying from release to release.
Top

TEB 9 and 10 are the worst in that domain. Otherwise, it's really not as bad.
椛ちゃん、助けてぇぇぇぇぇ！
Top

Eurobeat Festival Vol. 7.5 from SuganoMusic is for release at Autumn Reitaisai.
And here's the cover: https://twitter.com/strongestmelon/stat ... 3455073280

Oh boy, one month to go although I thought it was in november.
Hoping to see more HT from Hyper Strike!
Top

And previews apparently start one month before events now, haha: 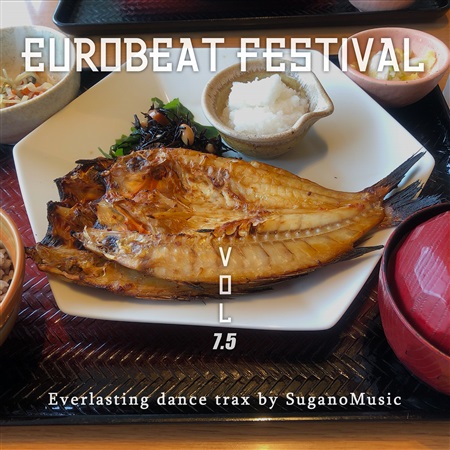 I know this has nothing to do with eurobeat but I can't just not post this (found this by accident too!!):

Although the title is kinda lame in my opinion it is definitely worth posting.
I've been always out looking for new Hyper Techno stuff and a few months back somebody recommended me SPEEDKING PRODUCTIONS.
They released Speedking Vol. 1 - 5 (and some other stuff, not gonna talk about it though) which was full of Death Techno, Breakbeat, and other similar genres.
There I started to like Death Techno a lot (and some of the Hyper Strike tracks are in fact Death Techno).

Hopefully they will carry on with their first release because it actually quite good even though it is not Hyper Techno which I like more.
We need more Techno stuff on events like Comiket, Reitaisai and M3.

Oh, before I forget: Track 1 is from uma

I assume that they will be releasing the singles now and the full albums at C95 later this year.
Glad to see we have a second volume of Eurobeat Attack. 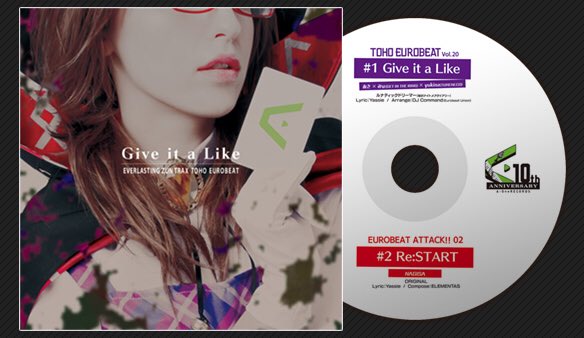 
youtu.be/zi-WYBVVXmw
___
Oh, Lebon, do you mind adding Silver Forest to the list on the front topic? Forgot it last time when mentioning K2E Cradle.
Their "Super Forest Beat" series contains just about only eurobeat.

Leader is NYO from what I could make out here:
http://www.silver--forest.com/about.htm
Top

Great news for those that doesn't care about CDs!
Starting October 14, ALL Zun albums, EPs... everything will be up on iTunes and Google Play*. THEN, as a bonus, a selection of popular doujin music circles will be available too! Which includes Toho Eurobeat (in its entirety!).

You can check the stuff that will be made avilable on iTunes and Google Play here:
https://touhou-music.jp/

At this point, you must be telling yourself... there must be a catch right?


Just a minor one!


AVAILABLE WORLDWIDE but with no possibility of streaming. File purchases only.

* The official Touhou games never received a soundtrack. So, these are still game rips only. The fighting games does however and will be available.
椛ちゃん、助けてぇぇぇぇぇ！
Top

Oh wow, these are some FANTASTIC news!!

I enjoy having physical discs in my hand (and will keep on buying them like this) but there sure are many people who are just afraid of going through the trouble with a forwarder and are fine with digital files only. Now many more people can enjoy awesome doujin music!

Best news ever for me !
I was on point to start an A-One CD collection, I hope it will not be too high-priced.

Users browsing this forum: No registered users and 2 guests