Hey guys.
This thread will serve hopefully informing people what's coming in the Japanese indie eurobeat world as well as the indie scene outside of Japan. Now, I won't hide the fact that I'm not well versed about eurobeat releases outside of Japan. So bare with me xD

So, what are the current known japanese producers / circles that make eurobeat? Let's have a look.
Here are some Western Indie Eurobeat producers that comes to mind:
Inactive/disbanded On break:
Halozy - Touhou focus, eurobeat not the main focus - No particular main series, 1-2 tracks per album. Has a tendency to make their stuff only available at events. They announced that they'll be taking a break of making new doujin releases; not a complete break up. Just a break.
[Website] [Twitter] [Melonbooks] [Tora-No-Ana] [SoundCloud]

At the time of writing this, Comiket 91 is the next main Japanese event coming up. So, here are the releases.

A-One: "Toho Eurobeat Vol.14 Koumakyou", "Eurobeat Attack Vol.1"
Notes: TEB Vol.14 is the first TEB album to available for shipping oversea without a forwarder. Available on AliceBooks! Also, the series returns to Embodiment Of Scarlet Devil. Because why not. Also, Travis has a song on this TEB.

Crazy Beats: "Initial T T-Selection Vol.4" and "Super Crazy Euro -Best Of S.E.S-".
Notes: New extended tracks from NMK and a non-stop mix of the best tracks that appeared on Super Euro Smash. The Super Euro Smash mix pretty much marks the end of that series in my opinion.

Eurobeat Union: Oh boy! Two new compilations! Euro Baka Ichidai Vol. 7 AND Vol.8! Vol.8 is a mix though of songs featured from Vol. 5-7. If you purchase both, as a set on Melonbooks or Tora-No-Ana, it comes with a special DVD. Content unknown. Also available for shipping overseas (like all the other volumes) on Alice-Books. Unfortunately, the DVD is exclusive to Melonbooks and tora-no-ana (womp womp womp womp).

They also announced "Grand Slam", a new album. Unfortunately, it doesn't have any eurobeat on it and has a variety of electronica and rock.
Crossfade: https://soundcloud.com/halozy/hlzy-0026_demo

Their website hasn't been updated and it's unknown if they'll be available on Melonbook and Tora-No-Ana. Probably though since they are full length.

Sound Holic: Sound Holic makes a return to retail after Rockman Holic!! They have a collaboration with Bemani and will cover various tracks from recent rhythm games called "Magma". It will release under Exit Tunes and is available on CDJapan. Only 1 or 2 tracks are expected to be eurobeat. On the doujin market, they have... 3 releases but only one matters here: their new "Kanji series" album called "Izayoi". It will feature AT LEAST 1 eurobeat track. All eurobeat track sung by Nana Takahashi. Coz it's the only vocalist wiling to sing eurobeat.

SuganoMusic: Sugano / Sugarini will be releasing a new volume of his new series "Eurobeat Festival" on C91. 11 tracks.

Hopefully it helps people to follow the scene a bit more and when asked "what doujin eurobeat stuff did you like", well, you can answer.
Last edited by Lebon14 on 24 Dec 2016, 05:28, edited 1 time in total.
椛ちゃん、助けてぇぇぇぇぇ！
Top

i hope to see indie from western can achieve more better levels to on par with indie japanese someday!

sugano, dj command are monster...lol! the legacy of eurobeat is so strong on japan!
soundcloud.com/hainam-1
Top

Hopefully, koolkool. Too bad that The Paradise Last is mostly inactive coz he'll be my favorite

Also, I made a mistake about Shoud Holic's magma being their second retail release. Actually, it's their second Bemani collaboration. They had another before that called Zan. Available here: http://www.cdjapan.co.jp/product/GFCA-386
椛ちゃん、助けてぇぇぇぇぇ！
Top

Lebon14 wrote:Apparently, NJK Record is alive and will release a remix compilation at C91.

I don't really know who was part of that circle actually. I think I only know of two, the female vocalist called 3L and Maria(male sign)Polo. She participated a lot with Sound Holic the past few years. And Maria has seen two tracks with Euro Baka Ichidai (and one as "Diablo=Breaker")

So, there's this remix album. There's one song that was off Toho Eurobeat. However, I really doubt that thing will be eurobeat and more like the first two NJK Record albums that had nothing to do with eurobeat (and were absolute trash, imo).
椛ちゃん、助けてぇぇぇぇぇ！
Top

they also announced "Grand Slam", a new album. Unfortunately, it doesn't have any eurobeat on it and has a variety of electronica and rock.
Crossfade: https://soundcloud.com/halozy/hlzy-0026_demo

Why didn't I see this thread earlier? oO

Thank you so much, Lebon! That's how I imagined a good overview of Indie Eurobeat. I'm really interested in Eurobeat Attack!
Top

Oh look, little old me is on this list <3 It's an honor to be part of indie eurobeat, it's something I've wanted to do for a long time but have never had the drive or the know-how up until last summer. Everyone should check out more of the indie music, especially the stuff from the west. There's some really great hidden talent out there!!
https://soundcloud.com/bvg_music
I post my eurobeat songs here!
Top

BlindedVanguard573 wrote:Oh look, little old me is on this list <3 It's an honor to be part of indie eurobeat, it's something I've wanted to do for a long time but have never had the drive or the know-how up until last summer. Everyone should check out more of the indie music, especially the stuff from the west. There's some really great hidden talent out there!!

A-One announced Toho Eurobeat Vol. 15 Youyoumu today on their niconico live-stream.
I don't know yet if Travis has a track or not.
Twitter link: https://twitter.com/ELEMENTAS/status/855410804992090112
I think that's for Reitaisai which is on May 7.

More later as I get the news.
椛ちゃん、助けてぇぇぇぇぇ！
Top 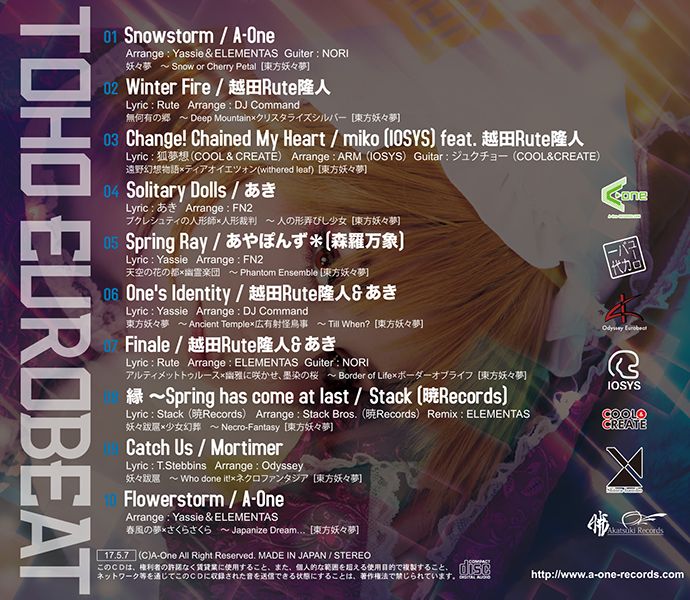 We have a Travis track! Also, a LOT of guests.

And the crossfade demo for TEB15 is also out!
https://soundcloud.com/a-one-1/toho_eur ... 5_youyoumu
(Yes, the trend of 1st and last track not being eurobeat continues.......)
椛ちゃん、助けてぇぇぇぇぇ！
Top
Post Reply
249 posts

Users browsing this forum: No registered users and 51 guests